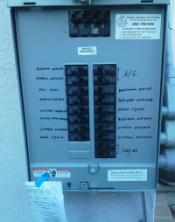 They’re often found in homes that are up to 70 years old. Reliance Electric made these panels and home builders started using them in the 1950s. Before long, they were installed in millions of homes across the United States. The only problem is that experts later discovered that these panels were unsafe. Having one of these panels in your home greatly increases the risks involved.

Your electrical panel sends electrical power throughout the home using circuits. It can help protect the home by tripping when the system experiences an overload, power surge, or short circuit. If the breaker doesn’t trip, the risks are grave.

The Dangers Of An FPE Breaker

Unfortunately, having an FPE breaker in your home is very dangerous. The United States Consumer Product Safety Commission has announced that these breakers often fail to trip when overloaded or short-circuited. Federal Pacific panels are notorious for not tripping when they should. There is also a risk that the panel is going to lock-up which means that a tripped breaker will never trip again. This is incredibly dangerous.

Studies claim that 2,800 electrical fires were related to FPE panels that did not trip. Unfortunately, these panels are unreliable because they were made using cheap materials. The risks associated with Federal Pacific electrical panels can be found in the list below.

When dealing with a Federal Pacific Electrical Panel, it is best to replace the panel. Repairing it is not a viable option. Many electricians will refuse to repair these electrical panels since they cannot guarantee that the system is going to be safe once they’ve finished.

Do You Have A Federal Pacific Electrical Panel?

You may suspect that your home has a Federal Pacific electrical panel. How can you be positive? Well, you’ll want to start by making sure that you’re living in a home that is 20 to 70 years old. The company is no longer around so it is highly unlikely that you’re going to find an FPE panel in a new home. To determine what type of panel you have, you should look for the label or logo on the cover.

You’ll also want to look for the words Stab-Lok inside of the panel box. The cost of replacing your electrical panel may exceed $1500. Nevertheless, it’ll prove to be well worth it in the long run. This will help cover the cost of repairs, new wires, and labor.

Are you worried about that buzzing electrical panel? Sounds unnatural right? Well, you are right to be worried. When it comes to anything electrical in

Over the years, Tesla has established itself as the leader in the electric vehicle industry. As you likely already know, the company is constantly releasing

In this article I’m going to reveal to you exactly how you can find a qualified queens electrician to do your next wiring job. You

Tesla, an American-based electric manufacturer, has reportedly sold more than 1.1 million electric vehicles. The manufacturer utilizes state-of-the-art technologies and design to produce some of

Hire an Professional Electrician in Queens

I don’t think I have to mention that electricity is not something to be toyed with. Not only can it cause a huge financial set-back

There is no doubt, electricity plays a major role in the modern home and business. Electricity is necessary for a convenient, comfortable lifestyle. Nearly all