What You Need To Know About Our Panel Upgrades In Queens

Unfortunately, it is entirely possible that your home currently has an electrical panel that is unsafe. It could just be a potential fire hazard sitting there, waiting to go up in flames. Scary, right? It should be because you could potentially lose everything that you’ve ever worked for. Luckily, this is what

we are here for. Our local Queen’s techs possess the knowledge, tools, and skills to handle a multitude of electrical issues. In fact, we can handle any electrical situation. The only problem is, knowing when you have a potential timber box.

There is a reason that Zinsco Electrical Panels were outlawed in the late 70s. This is because they are a major fire hazard, with the potential to melt breakers, burning wires, and cause shorts. Heck, our techs have even seen situations where the breaker was shut off, but still allowing electricity to flow through the circuit.

Fuse boxes are electrical systems of yore. If you are dealing with one of these systems, you without a doubt need n upgrade. It doesn’t matter if you are currently experiencing problems or not, you likely want to consider an upgrade. This is because fuse boxes have several design flaws that were detected over the years. Along with this, one of the major problems with fuse boxes is, they were only designed to handle a maximum of 60 amps. Unfortunately, there are a lot of electrical devices and components today that are way over this. Most homeowners don’t understand electrical loads and end up overloading circuits. Just because your fuse doesn’t blow or the breaker doesn’t trip, it doesn’t mean that you are okay or won’t later experience problems.

If you’ve heard the term pushmatic, you’re either an electrical contractor or currently in need of an upgrade. This is because these types of systems are lacking the ability to kill individual circuits. You can’t just kill power to the outlets, make a repair, and turn the system back on. You’ll have to shut down the entire system. Plus, these types of safeties don’t kick when they trip, meaning there could be a problem and power would still be flowing when it should be shut down. You don’t need to be an electrical professional to see the potential problems here.

Millions of these panels were installed during the 50s and 60s. Unfortunately, this has led to a multitude of potential problems today. Problems that could result in shorts, fires, and destroyed devices. The issue with these panels so severe that the state of New Jersey filed a lawsuit against the Federal Pacific Electrical Company. 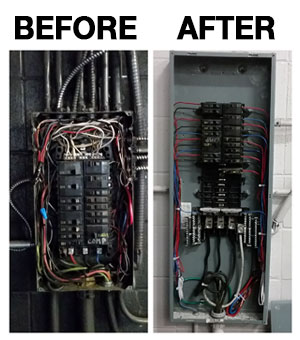