The electrical system is one of the most vital components of a residential, commercial, and industrial building. Without the system, there would be no electricity to power your appliances, electronics, central heating, and air conditioning unit, and lighting system. Instead of walking into a comfortable environment after returning home from a long day standing on your feet, you would be met by a cold gush of air.

Living comfortably in the modern world would not be possible with electricity. Nearly every home in Queens is installed with a residential electric panel. This is the heart of an electrical system. It consists of multiple fuses or circuit breakers and wires of varying colors.

When To Replace Residential Electrical Panel?

The outdated residential electrical system consists of cloth-covered wiring that is only guaranteed to last 50 years at best. This type of wiring poses fire risks due to the deteriorated cloth covering, which can break off and come into contact with electrical wires that are exposed to the elements.

Know The Signs Of A Failing Electrical System

Every homeowner should be aware of their electrical system. They should at least know the basics of functionality, capability, and limitations. It is also important to know the signs of a failing electrical panel. These signs include, but are not limited to, the following:

Inability To Shut Off Main Breaker

Residential Electrical Rewiring – What Is It And How Does It Work?

When Is Time To Rewire A Home?

All homes built in 1949 and earlier need to be rewired. Other factors that can help homeowners determine if their electrical wires need to be replaced include the following:

While residential electrical system rewiring is not recommended for homes built after 1950, there is one exception to this rule. Between 1960 and 1970, electricians oftentimes utilized aluminum electrical wiring to minimize installation costs. At the time, electricians thought it was good to utilize the aluminum electrical wiring in residential settings. Unfortunately, this is no longer the case.

When electrical wiring is guaranteed to deteriorate over time, decades of normal wear and tear will still put a strain on your electrical system. A U.S. Fire Administration report revealed 67,800 house fires were linked to electrical issues. These house fires claimed the lives of 485 people and left $868 million in damage to impacted properties.

What Kind Of Electrical Wiring Does My Home Have?

The only way to determine what type of wiring is installed in your home is a visual inspection of the electrical panel. Before starting the electric panel inspection, it is important to know what you are looking for as far as the electrical wiring goes.

There are several types of electrical wiring that can still be found in homes. These include:

How Much For A Full Residential Electrical Rewiring?

A residential rewiring project will vary from one home to another. There are several factors that will help determine the final cost. These factors include home size, electrician fees, and cost of labor. As one of the top electricians in Queens, New York, we offer free in-home electrical wiring inspections and quotes. 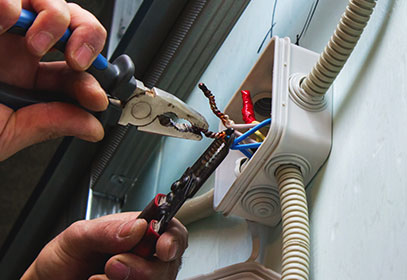